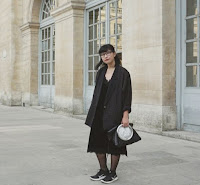 Chekka was born in Jakarta, on April 1987. Started her career in Indonesia fashion industry since 2007 as a freelance reporter for Female Daily, in which she met Thornandes James who became her mentor in Soap Magazine later in 2008. Having finished with the internship period as Fashion Editor Assistant in Soap Magazine, she helped James on various fashion shoots: editorials, advertisements, and exhibitions.

She started working independently as a fashion stylist and writer on April 2009, when she got an offer to be a contributing fashion stylist for a local teen magazine. From there, her portfolio has matured exponentially as she collaborated with many Indonesia's top fashion and beauty photographers such as Nicoline Patricia Malina, Glenn Prasetya, Stanley Allan, Hakim Satriyo, Bona Soetirto, Raja Siregar, Andre Wiredja, Ryan Tandya, and many other.

With such experience that spans over a decade, Chekka has grown as an established fashion director, consultant, and writer. She has worked at several prestigious titles such as Elle Indonesia and Harper's Bazaar Indonesia. Now she's the Senior Editor at Zilingo, leading the multimedia team regionally. In parallel to her career at Zilingo, she's also the Fashion Director at Indonesia's top modest wear label, Etu, and has grown the label to hold runway shows and exhibitions both locally and internationally. She strives to make a meaningful contribution to the fashion world, both in driving the discourse of fashion forward and also add to diversity, representing the many up-and-coming voices of fashion in the developing world, particularly from Asia.

For 11 years, she has been using her blog as a media to showcase her work and her personal style.
Contact: chekkacuomova@gmail.com
Email Post
Labels: About Me