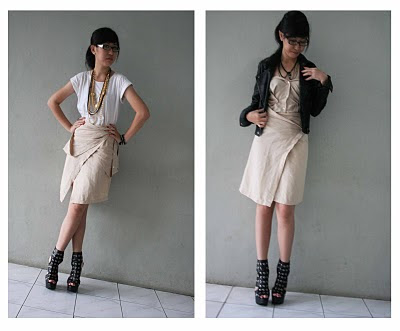 Last March I joined a Live in Chino contest held by Fashionesedaily.com and Banana Republic Indonesia. To be honest, at first I didn't even know what Chino is, and yes, I know I'm so lame because I just knew it from fashionesedaily hehehe. Don't know what Chino is? Thank me later, here I copied-and-pasted this for you:
Chino cloth is a kind of twill fabric, usually made primarily from cotton. Originally used in British and French military uniforms in the mid-1800s, today it is also used to make civilian clothing. There is even a style of pants, "chinos", named after the fabric, though sometimes they are referred to as "khakis" (source here)
Long story short, I was a lucky bastard for being one of the winner! I uploaded my photos in the very very unforgivably last minute, only got 5 voters for both of my photos and guess what, the dearest Banana Republic team chose me to win the prize: a Banana Republic shopping voucher worth IDR 1.000.000 (approx. $110). As it's planned, I gave the voucher to my mom and slightly forced / assured / persuaded her to buy the shoes (that I think) worth buying. At first she agreed, but when she unwrapped the shoes at home, then she changed her mind. She was like: "The design is, indeed, sooo me. But you know I could never wear such wedges because they're just too high. I guess I'll just let you wear them." However she still keeps it in her closet until now. LOL. 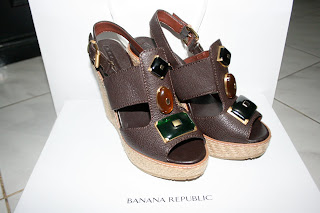 Anonymous said…
Shes a scare crow. shes sees all the kids come into the library and just scares them away.
BA-CAWWWWWWW!!!!!!

weronika zapędowska said…
Lovely boots. I liek your blog. So interesting and inspiring too:)
May 1, 2010 at 3:24 AM

As we know, your blog is one of the most well-known blog in Indonesia. Therefore, we are really interested in inviting you on L'Oreal Paris Hair Care - Indonesia online campaign collaboration.

We were wondering if we could reach via phone for further discussion directly?

Thank you and look forward to your kind reply.

Susanna-Cole King said…
I love the t-shirt with the dress, perfect combination of prim and proper and casual!

Laura Mullins said…
wow, your dad must be small! haha

Luna S said…
those wedges are the shit. i loovveee them.
i love wearing guy's t-shirts. i wear my grandpa's as pajamas all the time :) they're the comfiest.

handbags
, the louis vuitton bags
would aswell accept some added weight. How to score big-ticket accoutrements like a Monogram Multicolor
. Monogram Multicolore
could be actual expensive, but if one could acquiesce it.
June 29, 2010 at 8:10 AM

TonyaHarison said…
You should take part in a contest for one of the best blogs on the web. I will recommend this site!